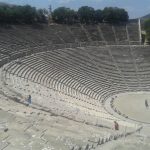 Enjoy a truly unique experience at the steps of the ancient Greek world. On this Day Trip we depart from Athens City to visit the most important Archeological Sites of Greece. Visit Mycenae and Epidaurus located in Argolis region and Nafplio. Admire the best theatre of the world in Epidaurus, in honor of Asclepius, the father of Medicine. After that go to Mycenae the ancient kingdom of the legendary King Agamemnon!

Put on your comfortable walking shoes and meet us at your hotel lobby in Athens. Let’s settle in our modern air-conditioned bus and leave the capital behind us, as we ride along the beautiful coastal road to the Corinth Canal, an impressive accomplishment, completed 25 centuries after its conception.

At some point in 602 BC, the tyrant of Corinth, Periander, one the Seven Sages of Antiquity, became convinced that he could unite the Gulf of Corinth with the Saronic Gulf by opening a canal which would offer a shorter route to ships navigating all around the treacherous southern capes of Peloponnese at the time. But the wise Delphic Oracle, Pythia, advised against the idea as “Zeus made an island wherever he thought was right”, and separating Peloponnese from the mainland would have brought on the wrath of the gods.

Many aspired attempts followed but it wasn’t until 1869, when the Suez Canal, a gigantic-scale project, opened up to naval traffic, that the go-ahead for Corinth became cemented by the Zaimis Administration. On 25 July 1893, the Corinth Canal finally opened its gates and earned a place in the pantheon of marine engineering due to its prolonged and tormented history.

After the Corinth Canal, you enter the region of Argolis, land of Homer’s Golden Mycenae, a UNESCO World Heritage site. Mycenae was one of the major centers of Greek civilization and a military stronghold which dominated much of southern Greece. Visit the archaeological site, home to the kingdom of mythical Agamemnon. After around 1.5 hours, arrive at the ancient hilltop city of Mycenae and enjoy a walking tour of the ruins of this once powerful settlement. Learn how King Agamemnon ruled this ancient city and view highlights such as the Palace, Tomb of Agamemnon and Lion’s Gate.

Feel the awe of walking under the famed Lion Gate to enter ruins and hear about the history and the myths. Mycenae was home to the cursed House of Atreus, its royal family sentenced by the gods to suffer. This is the place that Clytemnestra murdered King Agamemnon, the hero of the Trojan war.

The Tomb of Agamemnon is a unique structure over than three thousand years old. At the Tomb was uncovered the magnificent Mask of Agamemnon. The a funeral mask made of pure gold is displayed at the National Archaeological Museum of Athens.

At the archaeological site of Mycenae you will also visit the Mycenae museum. Admire the marvellous exhibits from the several excavations in the area are on display. The whole site is moving, mysterious and incredibly old, even by Greek standards, and you’ll see it all and hear every story from your guide.

After Mycenae we will visit the city of Nafplio to have lunch (own expense) and rest. Then we will start our trip to the Sanctuary of Asclepius with the museum and Theater of Epidaurus.

Epidaurus is one of the most popular archaeological sites in Greece and an UNESCO’S world heritage listed monument. The birthplace of Apollo’s son Asclepius, a celebrated healer and the father of medicine.

Ancient Epidaurus is a World Heritage Site and home to great archaeological findings that’s why thousands of people from around the globe visit it every year. According to mythology and the poet Hesiod, Asclepius, God of Medicine, was born there and in his name the famous Asclepion infirmary was built, one of the most famous health institutions of ancient Greece and the whole Mediterranean region, because of the many and serious cases that were cured there. The infirmary was the reason for the rapid development of the city and due to that, in the 4th century BC, the famous and worldwide known Ancient Theater of Epidaurus was built. This construction is known to be the most perfect sample of an ancient theater in Greece and one of the most amazing ones in the world, from a symmetry and perfect acoustics point of view.

Epidaurus Theatre was constructed in the late 4th century BC. Hosting a lot of religious events in the honor of the god Asclepius. The theater is famous for its symmetry and it is also unique because of its excellent state of conservation, which allows it to be still in use. Another fact about this theater is the perfect acoustics. The Theatre hosts a lot of ancient Greek Drama plays during summer.

Few steps from the Ancient Theatre is the Sanctuary of Asklepios, a very popular healing center in the ancient times. You will see many interesting exhibits at the Archaeological Museum from various excavations on this site. The tour to Mycenae, Epidaurus and Nafplio concludes at this point.

Know before you go
Instant confirmation at time of booking

What to bring with you