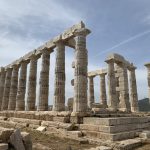 A unique Private Tour from Athens at Cape Sounio and the Temple of Poseidon with lunch! Enjoy a magnificent 90 minutes ride in your air-conditioned luxurious minivan toward the Attica Riviera. Drive along the shore line and have wonderful views over the Saronic Gulf and the cliffs, beaches and villages along the way. Above all, with this tour you can book with an extra charge your personal Licensed guide. This is an one in a lifetime experience that you should not waste it with a big crowd tour or just with a driver and a car!

The Tour from Athens to Temple of Poseidon

After a 90 minutes ride, along the Athens Riviera you will arrive in Cape Sounion and the magnificent ruins of the Temple of Poseidon. Subsequently, have a short walk to the temple, framed by the magnificent views of the endless blue of the Aegean Sea. Meanwhile, find out about the Myths around it and its huge importance as a place of worship and vantage point. Once at the Temple you will be amazed by the endless view and realise about the strategic importance of the point that the ancient Athenians built the Temple of Poseidon.

The history of the Temple of Poseidon, Tour From Athens

The Ancient Greeks built it in 444 BC in honor of Poseidon the god of the sea. Located in Cape Sounio the Temple stands above the sea at a height of almost 60 metres (200 ft).  Most importantly Cape Sounio was a strategic point in order to control the shipping lanes to Athens.

Xerxes I’s destroyed the original, Archaic-period temple of Poseidon on the site. This was in 480 BC during the invasion of Greece. Meanwhile, Xerxes had destroyed everything on the Acropolis of Athens, as punishment for the Athenians’ defiance. Though, Xerxes was defeated some days later in the naval Battle of Salamis. After their victory the Athenians placed an entire captured enemy trireme (battleship) at Sounion as a trophy dedicated to Poseidon.

Athenian statesman Pericles who also rebuilt the Parthenon in Athens, built the Temple of Poseidon. The Athenians built it on the ruins of a temple dating from the Archaic period. The design of the peripteros (it is surrounded with columns) temple is a typical hexastyle. The Temple had a front portico with six Doric columns. Originally it had 38 columns however only 16 are still standing today. The Temple closely resembles the well-preserved Temple of Hephaestus beneath the Acropolis. inside the Ancient Agora.

The Temple of Poseidon

The Temple is amazing and proves that ancient Greeks had a great taste when it comes to choosing a location! and attracts thousands of visitors every year. Only sixteen of the Doric columns remain standing but they still give to the visitors a pretty good idea of how magnificent it was and still is! While you are at the site you will also see the remains of a propylaeum, a fortified tower and the remains of the ancient stoa. Opposite of the Temple you can see on a hill that is walking distance to the northeast the remaining temple to Athena that was built at the 6 century B.C..

Temple of Poseidon has two time slots that are great to visit. Choose the morning tour and enjoy the great view and an amazing lunch or go in the evening and marvel the amazing sunset! It is the same sunset that enacted Byron’s lines from his poem Don Juan: “Place me on Sunium’s marbled steep, where nothing save the waves and i may hear our mutual murmurs sweep.” It is said that the great poet lord Byron was so impressed by Sounion that he carved his name on one of the columns.

The View from Sounion

The view is beyond words! Once you are at the Temple the view is like you are flying over Attica! No matter where you turn your head there is endless blue that meets with the sky! The Aegean sea right there at all its glory! One of the best places in Athens and Greece for photographs. You will take amazing photographs for your instagram account and for you to bring back at home with memories that you will never forget!

The Lunch at a traditional Taverna

After the photographs and the guided tour from Athens to Temple Poseidon you will have lunch close by at an off the beaten path traditional tavern for lunch. Taste great sea food mezedes at a taverna that only locals go! No tourist traps and mediocre typical food! Amazing seafood, one of the best in Athens! Please let us know if you have any dietary preferences and we will adjust the food to your likings!

Beyond the Sounio, Temple of Poseidon and Lunch Guided Private Tour, you can also choose an Evening Private Athens Tour at Sounio  to watch the sunset. As a result you will be mesmerised by the blues, reds and oranges that engulf the temple. After the end of the tour we will go for lunch at a local tavern and taste traditional sea food!

• Enjoy an amazing seafood lunch at a traditional taverna 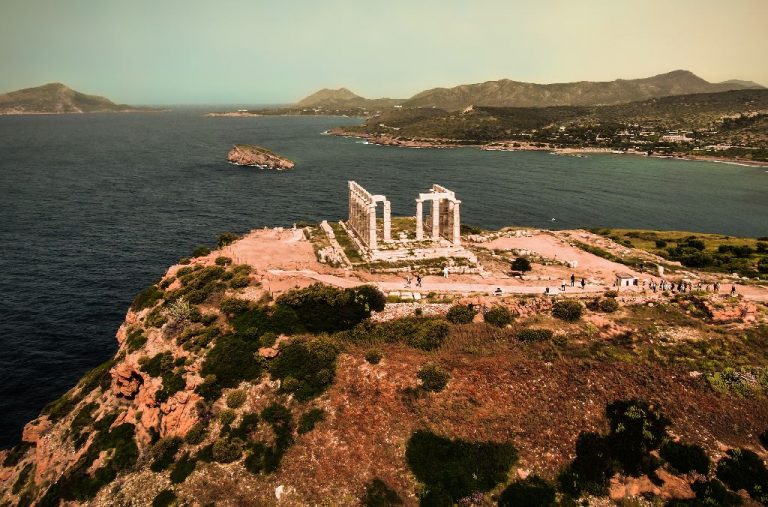